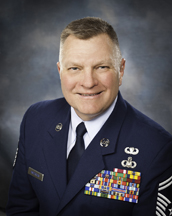 SMSgt. Brad Anderson is a native of Waukesha, Wisconsin, and served 28 years in the United States military from 1982 to 2010. His service included active duty with the United States Marines where he served as an infantry squad leader, tactics instructor, and completed a tour of duty with the Marine Corps Embassy Guard program. He served in several countries primarily in Europe and the Middle East.

Upon completion of his honorable active duty service, he returned to Wisconsin and began a career in law enforcement. Additionally, he continued his military career serving as a reconnaissance-scout section leader with the Wisconsin Army National Guard. After serving nine years with the Army National Guard, he transferred to the Air National Guard where he served as an aircrew combat survival continuation instructor, unit first sergeant, and superintendent of Aircrew Flight Equipment. Since 1983, he deployed on numerous national contingencies and combat operations.

He served as a law enforcement officer for 29 years and during that time he held various positions and duties including patrol officer, detective, tactical unit leader, underwater diver, and federal task force officer with the Drug Enforcement Administration and U.S. Marshals Service. He retired from law enforcement in November of 2017.

He is very grateful to have an opportunity be a mentor and work with fine young men and women who have selected St. John’s Northwestern as their foundation for quality education.