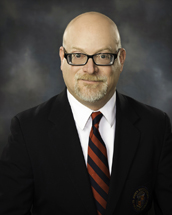 Conrad Jorgensen joined SJNMA in 2007 as director of the SJNMA Band after completing tenure in Central Wisconsin’s Weyauwega-Fremont School District where he spent 16 years developing a successful band program. He studied trumpet extensively while he was a student at Baylor University in Waco, Texas, where he received his Bachelor of Arts degree, and has been a professional trumpet player throughout Wisconsin since 1987. In 2015, he became the golf head coach.