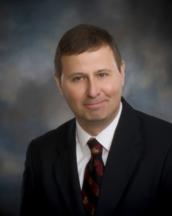 Charles Miller has been teaching at SJNMA since 1993. He has a master's degree in education, Bachelor of Science degrees in engineering and applied mathematics, and an associate's degree in financial planning. He holds two state teaching licenses. He served 10 years in the United States Air Force, three of which were as an instructor. His military decorations include the Joint Service Commendation Medal, the Air Force Commendation Medal, and the Air Force Achievement Medal. He teaches pre-calculus and financial mathematics, and is the chess coach at the Academy.