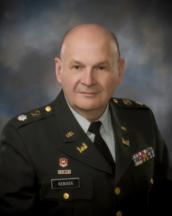 LTC Jim Kebisek, U.S. Army (Ret.), earned a Bachelor of Science from the University of Wisconsin and a Master of Science from Florida Tech. Upon retirement from the military in 1993 as an Army Corps of Engineer Officer, he joined the Academy and assumed the position of JROTC Senior Army Instructor. In addition to teaching and managing the leadership training program of the academy, LTC Kebisek was the camp director of Camp St. John's Northwestern from its establishment in 1995 until 2010.