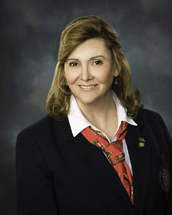 Judy Rutherford joined SJNMA as an enrollment counselor in July 2005 with 11 years of military boarding school experience. Prior to SJNMA, she worked at Massanutten Military Academy in Woodstock, Virginia, from 1994 to 2002 where she served as dorm parent, overseeing all functions relating to student life for the female cadets. She also served as a receptionist and registrar. In 1998, she was promoted to associate director of admissions at Massanutten Military Academy, and in 2002, was associate director of Admissions at St. John's Military School in Salina, Kansas