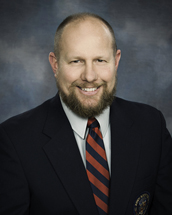 Retired from the U.S. Army after 21 years of service, First Sergeant Michael Black served as an Airborne/Ranger Infantryman for the majority of his career. He is Ranger, airborne, jumpmaster, pathfinder, and air assault qualified. He deployed to Afghanistan numerous times in support of Operation Enduring Freedom. His awards include three Bronze Stars and three Meritorious Service Medals along with numerous others. He earned his bachelor’s degree in homeland security with honors from American Military University.