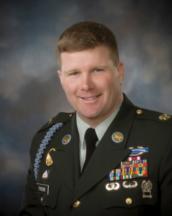 SFC Michael Trione, U.S. Army (Ret.), is an instructor with the JROTC program. He is a 21-year veteran of active duty service including Desert Storm. During his Army career as an Infantry soldier, he served as a team leader through platoon sergeant. He also completed numerous military schools, including Air Assault, Airborne, Rappel Master, Sniper, Recruiting and Drill Sergeant. He joined the Academy in August 2007, shortly before his retirement from the military. He has a Bachelor of Science in organizational leadership from Colorado State University.