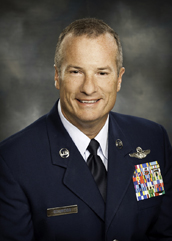 CMSgt Steven Schweiss, USAF (Ret.), joined the staff of SJNMA in June 2012 as a resident faculty officer, responsible for the morale, discipline and welfare of cadets in his company. In June 2015, he became the special projects coordinator for the Academy. He retired from the U.S. Air Force in May 2012 after 31 years of active military service. He served the first four years of his enlistment in the USAF Security Forces (Military Police) and retired in May 2012 after 27 years as a Career Enlisted Aviator flying on the KC-135 In-Flight Refueling Tanker. He is a qualified Combat Flight Instructor/Evaluator for the In-Flight Refueling Technician career field. He graduated with honors from the USAF Leadership School and Non-Commissioned Officer Academy. His final three years of service were as the In-Flight Refueling Program Manager and Chief Boom Operator for the 128th Air Refueling Wing. In this role he was responsible for the management and training of all the unit’s enlisted aviators along with advising the Wing Commander on all matters concerning aerial refueling and cargo/troop airlift procedures. He deployed to various locations in support of all major military and humanitarian operations over the last 30 years to include both Gulf Wars, Kosovo, post 9/11 Operations, Hurricane Katrina Relief Operations, and the 2011 air campaign in Libya. His military decorations include the Meritorious Service Medal, Air Medal, Aerial Achievement Medal, Air Force Commendation Medal, Air Force Achievement Medal, Southwest Asia Service Medal, Kosovo Campaign Medal, Humanitarian Service Medal, and Global War on Terrorism Medal.