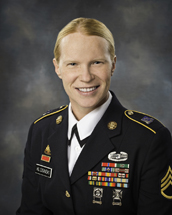 SSG Theresa Klosinski joined Wisconsin Army National Guard in December 1998 as a Transportation Specialist. Upon returning from a stateside deployment to Fort Bragg, North Carolina, she transferred units to Nevada National Guard and deployed to Iraq in support of Operation Enduring Freedom. After the deployment, she joined a signal unit and deployed to Afghanistan for 12 months as Operations NCOIC. She was selected for a special assignment on a Cultural Support Team and deployed to Afghanistan for a second time in 2012. Then she switched to the Army Reserve and joined the 432nd Civil Affairs unit in Green Bay, Wisconsin, for a year before transferring to the 334th IDT in Milwaukee, Wisconsin, currently serving as a Drill Sergeant.