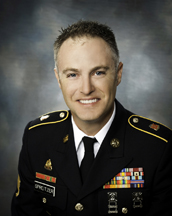 SSG Zachary Spreitzer joined SJNMA in June 2015 as a resident faculty officer for Summer OPS. He is a graduate from Watertown High School and attended University of Phoenix in pursuit for a bachelors in business management. He has been a member of the Wisconsin Army National Guard since February 2001. In 2003, he was mobilized to Fort McCoy for a year and a half with the 107th Maintenance Company as part of a state mobilization in support of Operation Noble Eagle. In 2009, he deployed with his unit the 108th Forward Support Company and the 32nd Brigade to Camp Taji, Iraq, where he performed Detainee Operations for nine months. Prior to his deployment and upon his return, he worked as a district sales representative for McKee Foods. He is currently serving with the 108th Forward Support Company as a motor transport operator.